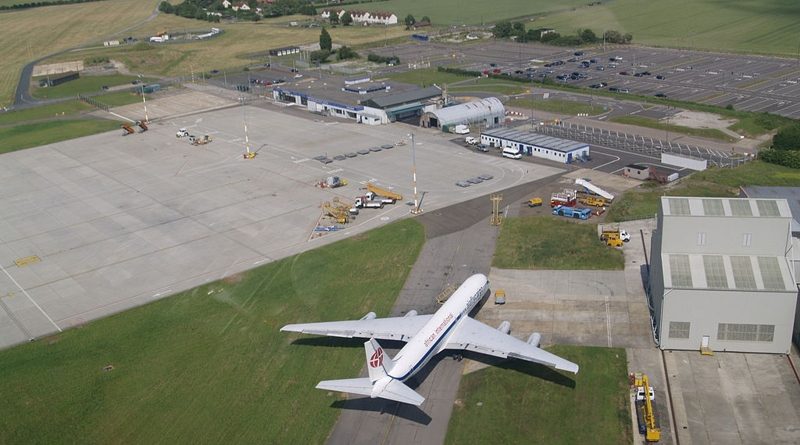 A 41- page report has been sent to the Planning Inspectorate by Pinsent Masons on behalf of Stone Hill Park.

They suggest that the proposed Development Consent Order (DCO) by RiverOak Strategic Partners should be thrown out and there are fundamental errors in the calculations of cargo movements. RSP disagrees with the findings and suggests that their work will demonstrate the case for Manston to meet the threshold required for a nationally significant infrastructure project, required by the DCO process.

In the same release, SHP appear to now suggest that the site has the potential for 4,000 homes, an increase on the previously suggested 2,500 in their submissions, as has always been expected by airport campaigners. We would also not be surprised if that figure alters again. It is yet to be seen if this increase is because of higher density, loss of ‘green spaces, less employment areas or their heritage suggestions.

Extract from the Isle of Thanet News article (https://theisleofthanetnews.com/stone-hill-park-document-to-planning-inspectorate-brands-rsp-manston-airport-plan-as-aviation-fantasy/)

The planning and DCO law experts, working on behalf of landowner Stone Hill Park which proposes a business, leisure and housing development at the airport site, say RSP’s cargo hub plans fail to meet the Nationally Significant threshold as they have measured the wrong starting point for the airport’s capacity.

They claim the application for a development consent order (DCO) cannot lawfully proceed for a number of reasons, including the DCO consultation material being too threadbare to meet  the ‘satisfactory standard’ legal test; a non-compliance with new tougher environmental impact assessment regulations, RSP being a new firm and not the original RiverOak applicant and their consultation being inadequate.

A new legal and aviation team working for SHP says the RSP application evidence is flawed because experts have calculated the current site is  capable of 21,000 aircraft take off and landings (known as air traffic movements or ATMs) which is 4,000 more ATMs than the 20 year-end target of 17,171 under RSP’s proposal.

They also claim RSP failed disclose the impact of aviation noise, on the highway network, air quality, human health and the environment.

Trevor Cartner, of Stone Hill Park Ltd said: “This compelling new legal and aviation expert advice reveals the RSP proposals to be the sham that they are.

“The only reason RSP has been trying to pursue its proposals as a Nationally Significant Infrastructure Project is to try and obtain powers from the Secretary of State to compulsorily acquire the site for a fantasy freight airport. Even if such an airport was a realistic proposition, it would cause nightmare noise, air pollution and traffic gridlock for local residents and businesses.”

SHP say they have informed the Planning Inspectorate that they have  incurred ‘significant’ costs as a result of  RSP’s actions and will be seeking to recover these “when RSP’s application for a development consent order (DCO) is aborted or rejected.”

The firm says the cost, which includes loss caused by the delay of SHP’s plans to date, is expected to amount to multi-millions of pounds.

A spokesman for RSP said: “RiverOak Strategic Partners disagrees with the basis on which Pinsent Mason has arrived at these conclusions. We are confident that all of the detailed work we and our professional advisors have undertaken, for the DCO application, will clearly and robustly make the case that our proposals for Manston meet the threshold for a Nationally Significant Infrastructure Project.”

Mr Cartner revealed the SHP plans for the Manston airport site involve the creation of 4,000 homes – 1,500 more than originally proposed.

In a statement issued today the firm said: “Stone Hill Park’s 800 acres is currently the largest strategic site for new housing in Thanet’s emerging local plan, contributing to 14% of the council’s total housing provision in the period to 2031.

“Loss of the 2,500 plus homes within the Local Plan Period and the future expansion potential of a further 1,500 homes on the site as part of SHP’s plans, would leave the council with no choice but to allow the development of hundreds of acres of Thanet’s countryside.”

SHP submitted a masterplan for the site to Thanet council in May 2016.

RSP says the proposal will create almost 30,000 jobs by the airport’s 20th year of operation.

George Yerrall, director of RiverOak Strategic Partners, told The Isle of Thanet News in May: “From the date that the airport reopens, almost 6,000 jobs would be created – around 850 jobs on the airport site itself and a further 5,000 indirect and catalytic jobs in the wider economy, in associated industries or businesses.

“The positive economic impact grows each year along with the airport. We have forecast up until the 20th year of operation, by which time 30,000 people in Thanet and East Kent would be able to trace their job to the revival of the airport.

“We have a real opportunity to tap into a proven demand for air freight that other South-East airports simply can’t meet. The £2 billion lost to the UK economy each year is set to almost double by 2050, even with an additional runway at Heathrow. Manston Airport is ideally placed to help recapture this traffic, which is being displaced to northern Europe. In meeting this demand, we create huge employment potential for Thanet and provide a powerful economic boost for the nation.

“We are in the process of discussing with local colleges and businesses how best to maximize career and supply chain opportunities in Manston.”

The DCO is due to be  submitted by the end of the year. A decision by the Secretary of State is expected by the end of 2018. If RSP gets the green light for its plans it says the opening of the re-built and refurbished airport will be in 2020.