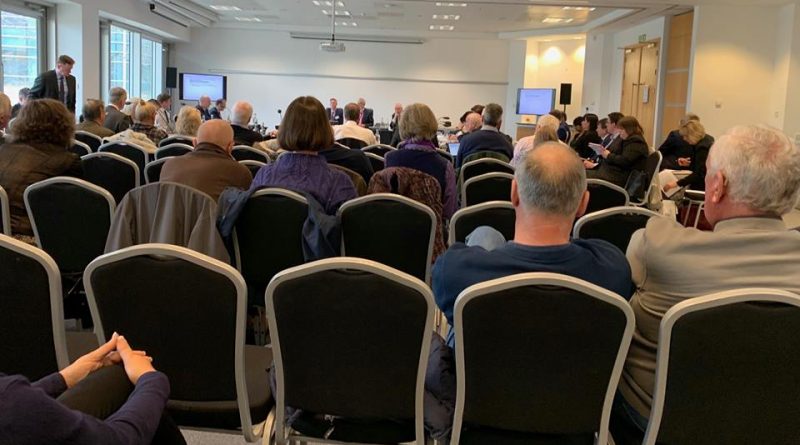 This week, the meetings continued to examine the Development Consent Order submitted by RiverOak Strategic Partners Ltd, taking place in Ramsgate and at Discovery Park.

On Monday 18th, there were Open Floor Hearings (one during the day and one in the evening), which took place at The Oddfellows, in Ramsgate High Street, which allowed interested parties to make oral representations about the application.

On Tuesday 19th, there were accompanied site inspections to view the various areas and sites being discussed as part of the DCO application.

The rest of the week consisted of specific meetings on the Compulsory Acquisition (Wednesday, 20th March), Need and Operation (Thursday 21st March) and Noise and Vibration (Friday, 22nd March).

The meeting began at 10.00am and ran until after 5.30pm. Today’s hearing was concerned with the Compulsory Acquisition of the airport site.

Stone Hill Park are of course, the main party who will be affected by the DCO but there are also other statutory bodies, including the MOD, the Crown and the Met Office, who will be affected. Additionally, there are scores of individual landowners who will need compensating. The Examining Authority (ExA) heard that agreement still had not been reached with the MOD, NATS and the Crown among others and that only 1 of 163 individual landowners had responded to RSP’s letters. The ExA reminded RSP that the ‘clock was ticking’.

The Book of Reference shows everyone who will be affected by Compulsory Acquisition as part of the DCO. https://infrastructure.planninginspectorate.gov.uk/wp-content/ipc/uploads/projects/TR020002/TR020002-003362-RiverOak%20Strategic%20Partners%20-%203.3%20Updated%20Book%20of%20Reference.pdf

The ExA questioned RSP about their company structure and their funding statement. RSP said that the restructuring of their company was still ongoing and isn’t likely to be finalised until the end of April. The ExA pointed out that they are now in week 10 of a 26-week process and that they need to know exactly who is applying for the DCO. When asked RSP said that they couldn’t reveal the identity of the investors because of commercial confidentiality. The ExA said that RSP had been warned over 7 months ago that they needed to provide an updated funding statement. RSP said they should be able to provide it by the end of April.

There were many other questions, and some rigorous discussions, throughout the long day which made very interesting listening. The audio recording will be available on the PINs website in the next few days. We will also post it on here when it is available.

In what was another long day, we first heard RSP put their case for the need for Manston to reopen. Their statement drew on many policy documents including the Government’s ‘Making Best Use of Existing Runways’.

The Examining Authority (ExA) asked if Manston Airport was mentioned in the documents – all parties agreed that the documents were generic and did not specifically mention Manston.

The freight capacity, both actual and forecast, bellyhold and dedicated, was discussed for each major UK airport. Connectivity was also discussed.

Both the ExA and SHP questioned RSP’s Dr Sally Dixon and Northpoint’s Chris Cain extensively about their business model, the fleet mix and how the figures were arrived at. At times it was very adversarial.

The ExA asked about the wider forecast and said,
In Year 2 the freight atms are given as 5252. This is 5 times the peak at Manston (historically) and 10% of the UK market – do RSP think that is realistic?

Dr Dixon believed that it was realistic according to her figures as RSP would tap into trucking freight, she called it a latent market. RSP’s Counsel, Isabella Tafur, added that by Year 2 they would have an integrator such as Amazon basing four aircraft at the airport and operating 8 atms a day.

When SHP challenged RSP saying that integrators would require night flights Mr Cain explained that they would be using a new model and would use an automated fulfilment centre to store commodities which would not necessitate the use of night flights.

In answer to a question from the ExA, RSP told the hearing that the CAA will not let them start the process of applying for a licence until the DCO is granted – and then it will take up to two years. So, RSP said that they were now aiming at starting operations, should the DCO be successful, in the first quarter of 2022 and not 2020 as previously stated.

Several members of the audience were then given a chance to speak, including Sir Roger Gale.

The Examining Authority (ExA) heard that RSP’s Noise Mitigation Plan (NMP) had been updated at Deadline 4.

The main changes were:

Here is the Revised Noise Mitigation Plan in full: https://infrastructure.planninginspectorate.gov.uk/wp-content/ipc/uploads/projects/TR020002/TR020002-003615-Revised%20Noise%20Mitigation%20Plan.pdf

Thanet District Council (TDC) and Canterbury City Council (CCC) were in attendance. TDC, in particular, made some pertinent contributions throughout and re-iterated their position that they consider themselves the more appropriate approving body, as the relevant, local planning authority, to discharge the Construction Environmental Management Plan (CEMP) and the Operation and Environmental Management Plan (OEMP) rather than the Secretary of State.

The ExA agreed stating they had a ‘slight difficulty’ with RSP’s position and questioned if the Secretary of State should be bothered with these local matters and emphasised that the local community has an important role to play.

RSP stuck to their guns referring to criticisms of TDC in regard of the PWC report in 2015 and also, more recently, the Local Plan and said that TDC would have a consultative role.

There was a long discussion around the definition of night flights. The ExA read the Airport’s National Policy Statement guidelines on the ban on night time flights between 11.00pm and 7.00am and then asked RSP about their night time ban.

RSP stated that they would not permit any planes to depart between 11.00pm and 6.00am and that there would be no scheduled, or programmed, landings. However, there will be occasions when planes, both passenger and cargo, would arrive late due to a variety of circumstances. There will be scheduled passenger departures between 6.00am and 7.00am.

SHP argued that many based passenger operations returned between 11.00pm and 1.00am. RSP refuted this and said they would provide data proving otherwise from other airports.

You can read about the Quota Count system, relevant the to following details here: https://en.wikipedia.org/wiki/Quota_Count_system

TDC asked why RSP were allowing QC4 flights at night when other airports have reduced to QC2 aircraft. RSP replied that the QC4 is an allowance in relation to a late running freighter which, they said, is reasonable on the rare occasion when there’s a late arrival.

TDC, “Can you explain the derivation of the 3028 annual Quota Count”. RSP, “It’s based on the forecast and the calculation from that precise forecast analysed.”

CCC, “Is it envisaged that there will be no cargo flights between 23.00 and 06.00, is that correct?”. RSP, “There will be none programmed to arrive, there may be some late arrivals that would be accepted at the airport, but there will be no departures under any circumstances.”

TDC, “On a typical night how many flights will arrive late?” RSP, “The environmental assessment includes an average of 7.6 (per night)”

There was a lot of discussion around noise contours and compensation for affected properties, including listed properties and residential caravans, schools and other public buildings.

The ExA said that they would publish a further set of questions to RSP on 5th April and requested that RSP produced notes on matters identified during the meeting by Deadline 5, 29th March.

There is one further period set aside for public Hearings between 4th – 7th June. The Examination as a whole must be completed by 9th July.

This was another long and very technical meeting. The audio recording will be published on the PINs website next week.

The next step in the DCO Timetable, available here: https://infrastructure.planninginspectorate.gov.uk/projects/south-east/manston-airport/?ipcsection=exam is Deadline 5 which will see the deadline for receipt of:

The next set of dates reserved for further meetings, should they be required begin on 4th June 2019. The deadline for the close of the examination is 9th July 2019.