Today we remember the Battle of Britain on the 75th anniversary, including the role that Manston Airport played.

“Manston RAF base in Kent started life in World War One as a Royal Naval Air Station. At the start of World War Two, Manston hosted a School of Air Navigation but this was quickly moved out. On September 10th 1939, No 3 Squadron flew in equipped with Hawker Hurricanes. Manston was put under the command of No 11 Group Fighter Command. Blenheims were also stationed at Manston in late December 1939. These aeroplanes had been fitted with an early form of airborne radar and it was the task of the Blenheim IV’s to find and destroy German planes that were mining the River Thames during nighttime raids.”

“Manston, being one of the nearest airfields, played a major part in supporting troops during the Dunkirk evacuation in May 1940.”

“During the Battle of Britain, many squadrons used Manston as a forward air base. Though under the control of Fighter Command, the only regular squadron based at Manston was No 600, which flew Blenheims. These aeroplanes had suffered greatly at the hands of the Me-109 – the Luftwaffe’s mainstay fighter at this time – and had been shifted to nighttime patrols.”

“The Luftwaffe first attacked Manston on August 12th. Much damage was done to the hangers and to the runways. Spitfires from No 65 Squadron were actually taking off when the bombs first started to hit. However, they found the space on the ground to land once the fighting was over before flying off to their home base at Hornchurch. There were over 100 bomb craters in the runways but they were only out of action for 24 hours before they were deemed useable again.”

“A second raid on August 15th also left the base badly damaged. Further raids on August 20th, 22nd and 24th nearly destroyed the base. By the end of the raid on the 24th, Manston had no means of communicating with anyone else and the runways were littered with unexploded bombs. It was decided by No 11 Group Fighter Command, that the damage at Manston was so great that the base had to be downgraded to ELG – an emergency landing ground only.”

“However, repairs were made to Manston and by the start of September the base was back in use on a limited basis. Two Lysanders were based there to support the Air Sea Rescue service at Ramsgate. Spitfires and Hurricanes did start to reuse Manston but only as a forward base before returning to their home base after completing patrols.”

“After the Battle of Britain, planes based at Manston took part in raids on German shipping in the English Channel. Aeroplanes from Manston accounted for 44,600 tons of shipping destroyed with 27,500 tons damaged. However, the loss of planes was unacceptable and ‘Channel Stop’ operations were ended.”

“The runways at Manston were also extended to allow for damaged bombers returning from raids in Europe to make emergency landings.”

“Manston played its part in the ‘Channel Dash’ – when three capital ships of the German Navy somehow managed to sail from Brest, through the English Channel and into the North Sea in February 1942. The ‘Scharnhorst’, ‘Gneisenau’ and ‘Prinz Eugen’ were very large targets at sea even if they had air cover. But as a result of many errors all that the three ships had to endure was an attack by Dover-based MTB’s, which failed badly and an attack by six Fairey Swordfish armed with torpedoes, which took off from Manston. All six Swordfish were lost with fifteen out of eighteen men being killed. Escorted by just ten fighters instead of the promised sixty, the Swordfish knew their chances of survival were minimal if their attack went ahead. Despite this, their leader, Lieutenant Commander Esmonde led the Swordfish into the attack against the heavily armed and armoured ships. Esmonde was killed and awarded a posthumous Victoria Cross for his heroic leadership.” 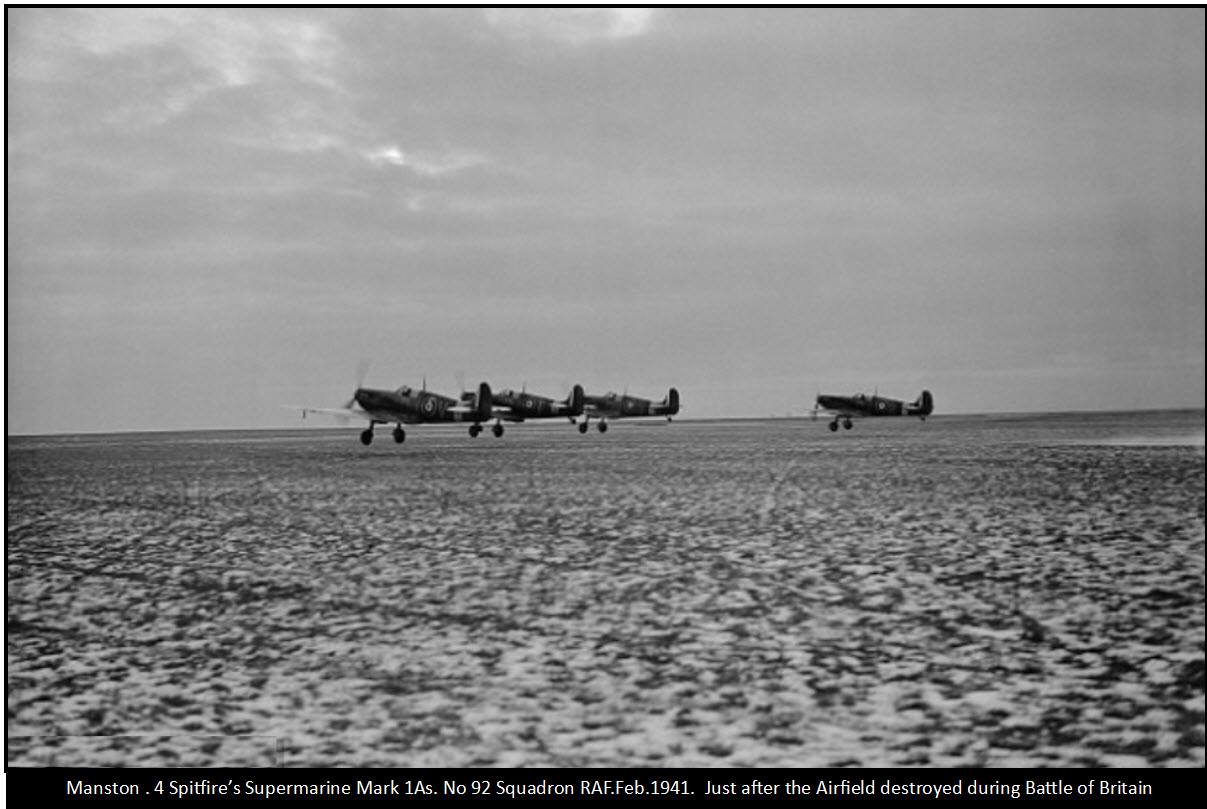 “Manston was considered so important that it was given its own battalion of soldiers to protect it against paratroopers. Manston was also given a very specific role – the defence of Canterbury. As the heart of the Church of England, Canterbury Cathedral held a very special place in many people’s hearts. The bombing of the Cathedral was too much to contemplate and Manston was put on standby to protect the city. Leigh-Mallory, head of No 11 Group, sent Hawker Typhoons to the base, which were kept on permanent standby.”

“Many fighters based at Manston gave air cover for ground troops during the ill-fated Dieppe landings. While the landings at Dieppe led to many casualties, the success in the air meant that Manston fighters accounted for forty Luftwaffe aeroplanes at a loss of nine Spitfires.”

“Manston became the base for a variety of aeroplanes that were used against Channel shipping and coastal defences. Planes based at Manston also took part in escort duties for bombers attacking Nazi Germany.”

“In February 1944, Manston became part of the 2nd Tactical Air Force (2nd TAF). The base also had a new elongated tarmac runway, which was more able to cope with the many damaged bombers that were increasingly using Manston as an emergency-landing base.”

“As with other fighter bases, Manston played its part in the D-Day landings of June 6th 1944. Typhoons from Manston proved a formidable enemy to the German army when it tried to move tanks and other vehicles to the front. Aeroplanes from Manston also took part in ‘divers’ patrols – attacking and destroying V1 rockets being fired at London.”

“By the time war in Europe ended, Manston was credited with 234 German planes destroyed, 123 German ships sunk and 161 V1’s shot down.”